Skip to content
Everyone has own his or her version of the Fish (marlin in this case) that got away.  Mine is different, why you ask… because it’s me.  This year when we went to Mag Bay with the Salt Junkies Inc. group we saw something you only could dream about.  I felt like I could be Moises for a second and walk on water.  Not literally but pretty darn close.  You could step on Marlin to get from one side of the ocean to the other.   Believe me? Oh well, everyone else on the trip seen it for themselves.   At least football fields across big striped marlin were feeding on the surface.  Splishing, splashing and making the most commotion I have ever seen. 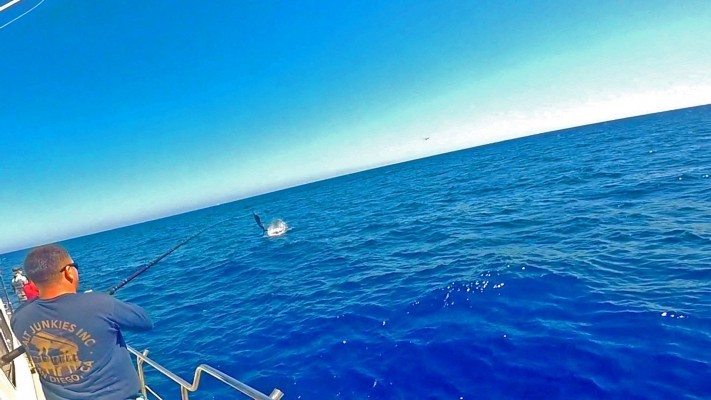 We have been fortunate to fish various trips without bait and if you’ve fished with me in the past you know I’m the last one to pin bait on.   Something about knowing there’s a fish out there that will inhale your jig gets my blood pumping like you couldn’t imagine.  This fishing trip was no exception – cast, retrieve, cast, retrieve, jig, drop, jig, drop you get the picture.  Usually we are doing this for yellowtail, tuna, dorado, Cabrilla, Wahoo, or other fish you can expect to encounter on the Pacific or Sea or Cortez. In this case it was marlin we were casting on.  Smaller grade of striped marlin were everywhere from 100-200 pounders it was fun to see them chasing your jig all the way to the boat.   One particular cast I made Prieto and Josue (Wahoo Loco crew) were next to me and made a comment “vamonos” you need bait for these guys.   Negative ghost rider that’s bulls*it we will get them to eat our jig irons.  Just like that I slowed down my retrieval and sped up to get inhaled by what looked like a bigger blue marlin came for the backside and pushed two other stripeys away and bam! I was on….. 45 minutes, 3 times around the boat and that concluded my fight with this beautiful creature. By looking at marlin in the water I can’t distinguish whether it’s male or female but let’s just refer to “her” as Sheila.  Sheila was a beauty putting on a dance for me and the others and who knows if we will ever meet again so for now until next time adios Sheila I dedicate this drawing to you. 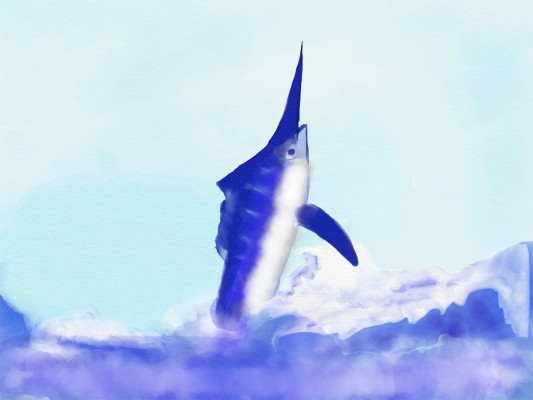