Skip to content
Wahoo, when the word comes to mind what does it do for you?  Boat Captains, long-range passengers, as well as private boat owners all have different input when asked.   Different methods and practices are used to capture these long, toothy, torpedo shaped creatures of the deep.  When I say creatures of the deep do you know exactly how deep they can be found?  One thing for certain is that they like structure based on my personal experience and after extensive research and interviews it is agreed upon that wahoo indeed are a very structure oriented fish.  They can often be found in depths ranging from 0-350 feet deep.  Personally to me there’s nothing like slaying wahoo on a surface iron or wahoo bomb.  But nonetheless wahoo are a fun species to fish for regardless if you’re trolling or casting on them. 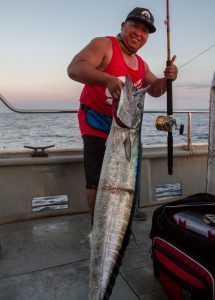 So be sure to look at contour lines on the map of your targeted fishing area.  You can also target them by fishing near high spots or pinnacles, even kelp patties, as they seem to linger in these types of areas.  Another thing to look for when fishing wahoo is temperature breaks, tidal changes, and watercolor changes. With speeds of up to 60 mph and they’re torpedo shaped bodies as stated before these guys are underwater terrorists to bait, jigs, and trolling lures alike.  So what’s the best method to target this species you ask?  Well high speed trolling and iron slinging seem to be your best bet.  They are fully capable of hitting your troll spread at up to 18 knots.  I’ve heard of them hitting the props of the boat with them being so shiny and the speed they are traveling they get real curious.   If you look up wahoo fishing videos online there is videos where the wahoo go full aerial after blowing up on trolling lures or lures being skipped on the surface while being reeled in.   l personally have experienced them get crazy on a tuna stop biting the fish in half as well as taking the jig with them. Have you seen what makes the wahoo? Strong, elongated muscular bodies but slender enough to cut through the water with razor sharp teeth. The jaw structure of this creature is similar to that of a marlin where it’s extremely tough.  Hence the amount of short bites you may encounter when fishing wahoo your hook to catch ratio will differ.  In laymen terms they are hard to hook because of their mouths.  Go give it a shot and troll until you find them and when you do don’t think twice to toss a jig back behind the boat and wind as fast as you can until you get bit and hang on, you’ll be in for a ride. For your custom wahoo fishing trip contact Salt Junkies Wahoo Charters For custom Wahoo Lures check our site here